MIAMI'S OWN ORION SITS DOWN WITH NINE5FOUR MAGAZINE: ALL THINGS HIP HOP 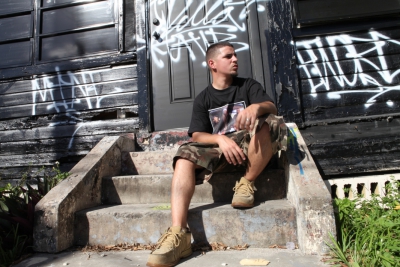 For those who may not know,whats your name?
Haha Orion aka Brass Balls aka "Willie Brickell"

How did you get the name Orion?
A tribe at a drum circle gave it to me

How long have you been rhyming?
Just over a decade now

What was the hip hop scene like in Miami when you were coming up?
Prior to actually becoming a contributor to it I was just a listener.  At first I knew very little about it didn’t even knew it existed to be honest.  The first real “Emcee” I heard really spit was Mic rippa back in the days on 96.1fm I didn’t know dudes from Miami had it like that I was a jit at the time so it wasn’t like I was out in the scene or allowed out for that matter.  Before hearing him all I knew from Miami was 2 live crew and trick daddy.  Then I started digging deep and what I found was a real dope scene full of crazy talent Mother superior, Society, Science Room, Doz Funky Bastards the list goes on.  You know what I heard Society’s “yes n deed” way before I heard Mic Rippa I just never knew he was from Miami.  Anyways when I finally started getting the balls to spit in ciphers, battles, open mics and shit like that was probably 2003.  It was hard comin up I always had a feeling like damm I started too late cuz there was always dope heads around me like Infnit, Wreckonize, Serum, Dtox, 8ch2o, etc.  I had to really push myself everyday writing, making beats, recording, freestyling, battling everything man.

When did you realize you had the skills to take music seriously?
I had spent a year in Orlando studying and got to know their local hiphop scene.  I was able to place 4th in some emcee Olympics they had at UCF.  It was like 20 emcees that were competing that night and real dope cats too.  I was new to spitting I had no idea what the fuck I was doing really.  After that shit one day I was working in a movie theater and this kid came up to me quoting one of the lines I said that night.  That was the moment son. (Spielberg music please) haha

Do you think Miami gets enough credit for its contributions to hip hop?
Ummm Yes and No Luke gets his shine here and there.  Outside of him a lot of Miami is rarely givin props.  A lot of people don’t know this either but some of your favorite new york albums were recorded in studios located in Miami

Who were some of your favorite artist growing up?
Wu-tang and Krs one were the two that indoctrinated me into this shit.  After them everybody else came Nas, Cypress Hill, Mobb deep, Too short, Snoop, Tupac, Hami nah I’m jus playin with the hami shit lol

Best Producer of all time?
Damm that’s a tough one I think in hiphop everyone had their streaks feel me like Rza, Dre, Organized Noise, Pete Rock, and Dj Premier are my top 5.  with Eric Sermon at a close 6.  Outside hiphop Quincy Jones, David Axelrod, Bob James, and Nile Rogers.

Best rapper of all time?
Nas everyone just needs to come to terms with this. Lol

Best album of all time?
Enter the 36 chambers

Best Hip Hop movie?
You got served nah nah haha umm, fuck it  i would have to say "Juice"

Who would be a dream collaboration for you?
With an artist or producer dead or alive...  Artist Wise Intelligent because he is wise and intelligent.  Producer Rob Lewis he did most of all the production for Nine’s first two albums.  I thought he was ahead of his time and to my knowledge he aint in the game anymore.

How would you describe your style?
A flexible contradiction what I mean by that is I’m not afraid to take it in different directions subject matter, beats, flow whatever I make music period.

Where do you draw your inspiration from when you record?
Life experiences good, bad, and the bullshit in between.

You Produce as well as rhyme. what made you want to do both?
Always wanted to and I got tired of looking to get beats from people.

In your opinion what are the traits of a dope emcee?
Creativity, lyrics, flow, and strong work ethic

You put out some classic albums during your career, tell us about your past projects?
I have three albums out my debut was “Esperanza” then “Balls to the wall” is like a album/ mixtape, and the last one I put out was “Hunting season”.  They are all different in their own right I feel with the debut it was real sporadic and I was trying a lot of avenues out.  The last two are more cohesive projects.  Other than those projects I’ve been blessed to put collab on other projects like Elastic Bond’s “ Excursions” Smoke and Miras “Line in the sand” and a bunch of underground sweetness out there.

All of your projects have a message or theme. from the art work, skits, and lyrical direction. tell us about that?
I like to get real conceptual with projects the whole thing has to speak to the listener I want to get your interest as much as possible.

Do you want to stay independent?
Nah I want some company to market the shit out of me, make me a household name, rape me financially for a few years, and then once I’m fully in the industry machine I can break out independently have my fan base and complain about all those years I was screwed by the suits.  Yeah (roll Mozart conclusion music please)

You are now a father. how has that changed your approach to music and life?
Its changed me as a man and that just comes through in my music naturally I can’t explain how.  I love being a father it’s the greatest work I’ve ever pursued.  In one way I know its changed my approach is its givin me time constraints which make me less picky with what I’m putting together.  I slap shit on now and won’t bother to do much tweaking.  Where as before I would spend hour upon hours upon weeks mixing now I’m just like fuck it here it is.  Sorta like a painter who use to be mad technical with it doing crazy elaborate paintings and now the dude just paints with his hands splashes a bunch of paint but still manages to wow you.

How do you feel about the term "Back pack emcee"?
I think he should battle the “madd rapper”  that would be a dope skit

Who are some emcees that we should be on the look out for?
NFA, Legacy, Midaz the beast, Starvin B, Boaz, Tito Ortiz, Epidemic

Have you ever thought about developing your own artist and producers?
Yea I got a strong crew Smoke and Miras I can’t explain how much talent we have within it.  If I were to have the opportunity to do so I would have to look no further than my own crew.

At this point what are some of your goals to accomplish in the music game?
To find my niche my audience without having to be something I’m not.

What projects should we be on the look out for?
Solo project I have “Freshly Brewed since 82” coming soon.  A collaborative project with the homie thousand called Whut dey Due entirely produced by Insolent.  I also have a documentary I’m put out with the homie Mr. Chris that’s gonna be real dope for hiphop in general.

How can fans get in contact with you?
Instagram: Brassballs09
Soundcloud: orion-smoke
Email: This email address is being protected from spambots. You need JavaScript enabled to view it.

Do you have any final words?
Shout out to everyone who digs my sound and supports what I’m doing.  Check out my latest joint “One life” on my soundcloud page and other tracks which will be featured on my next project.  Bigs ups to you man for doing this interview with me.