Supa: Prince of the Yayo 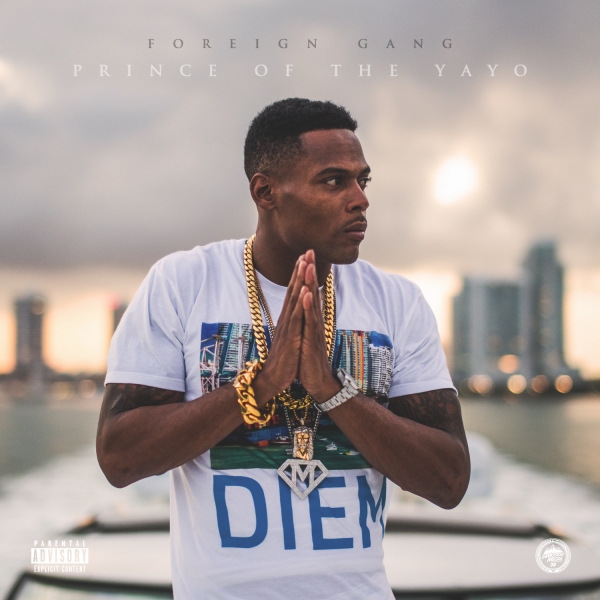 There is a huge spotlight on the Florida music scene right now. South Florida is producing some of the best young indie and unsigned talent in the country. It's been a long time since there has been this much excitement in Sunshine State. Supa is a rapper that is quickly making waves. The self-proclaimed "Prince Of the Yayo" and his foreign gang clique have been consistently feeding the streets with classic mixtapes, videos, and live performances. I got a chance to sit down with the Foreign Gang general to see what made him the artist he is today.

For those who don't know how did you get the name Supa? Supa, that means Great! That’s what that mean, Great… I’m one of a kind type of a guy, it mean Real. I actually didn’t give myself that name – people surrounding me gave that name when I use to play ball. It means Greatness

What made you want to pick up the mic? I always had the talent to do it (music); but I never care about doing it, before. I would always go to the clubs and hear them screaming my name out, you know “Supa in the building – Prince of the Yayo.” Just off the lifestyle that I live. A hustler gon’ hustle – I turn my lifestyle into the music.

At what point did you realize you had the talent to make this a career? I knew that I had the talent to make it a career the moment that I started doing it. I mean, I always freestyle when we were kids, I always had ways with words but that wasn’t my focus. But Sh*t, like I said – going out and already had a lifestyle of it, you know – it wasn’t my main focus. I wasn’t the one who grew up thinking I was going to be a rapper – you know, I ain’t a rapper – I just speak facts, I speak my life, I’m an artist… I speak motion pictures. That’s what really made me want to do it – my lifestyle, I’m a hustler.

Your new Mixtape "Prince of the Yayo" has been getting a lot of rotation in the streets. Are you satisfied with the feedback of the mixtape? For sure. I have three different songs right now on major radio airways. There are more hits songs on there; “How we Live” we just shot a video for that features R&B singer, Mishon. That’s something that will go straight up the charts. Yea, man – the streets are supporting, and a lot of people are surprised on what I came out with on this entire compilation and said. No one knows me of being a rapper, they know me of being that guy." I love it. I’m touching the people, you know – the people touching me. They are motivating me to keep going,

What made you recruit DJ Scream and MLK to host this mixtape? ‘They are just real and supportive, overall. Real recognize real. Atlanta is considered Black Hollywood, that’s what they call it for the entertainment and music industry. If you touch the airwaves with deejay personalities such as Scream and MLK supporting, you touch Atlanta– it just a connection and the vibes. In Miami, I got DJ Bulletproof, and DJ Vibes, that support my music. Salute to all of the deejays worldwide that supports. DJ Scream and DJ MLK – they have that name, that brand, they have footsteps in these streets. That’s what you want – you want to touch bases with the people.

How did they foreign gang crew come together? and who are the official members? I started the Foreign Gang – my boy, Mr. Zeek, he came over to the studio for a feature and I let him know he is Foreign Gang. Foreign Gang is Mike Bless as well, also TMB, The Money Boy Lil’ Mikey who out of Oakland, CA. We all make up the Foreign gang members. I started from going out and putting everybody in better position. All my ni**as are from the streets, putting ni**as with talents in better positions. That’s how the Foreign gang started which is a subsidiary of Champagne Elite Music Group.

Miami is having a major resurgence these days with artist like you, Zoey Dollaz, Steph Lecor and now Kent jones. How dod you feel about that? Miami’s music we are taking our marks right now. Zoey Dollaz, actually a funny story is right before I started making music he reached out to me about doing music. So we are making our marks – you know, there are a few more guys out there like Kent Jones; our songs getting play on radios, traveling the world, we letting people know that Florida is the South. Miami really got that music. My Uncle Luke started the trend, to Trick Daddy – Pit Bull, now you got Supa, Zoey Dollaz, to Kent. We Back… Dade Back.

Who were some of your musical inspirations growing up? 2 Pac . . 2Pac was an inspiration growing up… I always pick things up from the old G's, I always hung around my big cousin. They use to vibe to Pac.

Florida has a lot of great talent but why do you feel that Florida has not produced as much talent as it should? Because everybody ain’t sticking together as one. Everybody wants to be the big dog – nobody wants to reach a hand and look out for the other people. Once we get that unity to come together then Florida will grow. I like how the people in Georgia move – once you go to Atlanta – you hear nothing but Atlanta artists; whether it’s the known artists or the up-and-coming talent. That’s the thing Florida got to come back with.

What advice would you give to kids that want to make it out of tough circumstances like you did? Keep God First, Stay true to yourself, put trust in nobody, but God. Be You! That’s all you can be, Be You!

Your music really speaks to the people and everyday life. Did growing up in liberty city give you that mind frame? For sure. I only speak what I been thru – I only speak what I live. That’s why I can’t be considered to be a rapper because they print pictures and sell dreams – and they let the people buy their dreams. I live the real struggle, you know – if you watch the First 48, my mamma house is on there twice. I had seen everything from Dope-selling, to killing to robbery, to brothers turning on brothers, family members turning on each other. It opens your eyes to make you want to do better especially to people who don’t have that guidance. Everybody didn't grow up with their Dads in their life. I was blessed to have mines. It makes you want to go back and reach those people.

The video for she wanna go is dope with a lot of nice things to look at. I'm not mad at the female selection lol. How did the concept for that song come about? We got on a yacht. Partied all day and live life – that’s how that came about just from enjoying a day on the beach.

Will you be shooting any more videos for songs of the mixtape? Yea, we just shot “How We Live,” I'm gonna shoot one for a track call “Shooters” I got a video for “Feel Me” There are a few more songs we are going to shoot for.

The production on this project was crazy. What was it like getting on an 808 mafia and zaytoven track? It as a privileged getting one of the 808 Mafia and zaytoven track. Growing up and hearing guys like Jeezy, and Future one of the hardest rappers in the game right now; so actually getting a production by the same guys that did the production for him – that’s good music. Shoutout to the whole 808 Mafia and Zaytoven !

Do you feel pressure to represent and live up to the hype of Miami artist before you? It ain't hard. I grew up under the wings of Uncle Luke – my uncle; he started the whole down south movement. You know, seeing women dancing in the videos and twerking, and DooDoo Brown back in the days. At the end of the day, I grew up on it – I just have to thank God for my blessings and continue to live. You got guys like Trick Daddy, the stuff the rap about, the game, you know it was real. I grew up in that area that Trick was talking about. It’s easy for me.

What is your situation at the moment? Are you indie? We are indie, Foreign Gang/CEMG; I’m an indie artist.

How would you describe your sound to somebody that has never heard you rap? Pure! Real. . Different. . Sh*t Foreign. It’s going to be a different touch – it the flows, it’s going to be real. Anybody that lives thru struggles, knowing the lifestyle, they are going to relate.

What upcoming projects can we expect from you and your camp? You got Mr. Zeek, we just did his video. Lil’ Mikey, we actually about to drop something. I got a new single, and we are about to drop the video to “Yayo” We got a lot of things coming – oh, and Mike Bless about to come with some R&B real soon as well.

Do You have any Final words? Free M, Rest in Peace Trav! Supa – Prince of the Yayo, Foreign Gang over Everything. That’s all I got to say!

More in this category: « TAY G: Man on a Mission Voice of the City: Novaking »
back to top
Current Issue